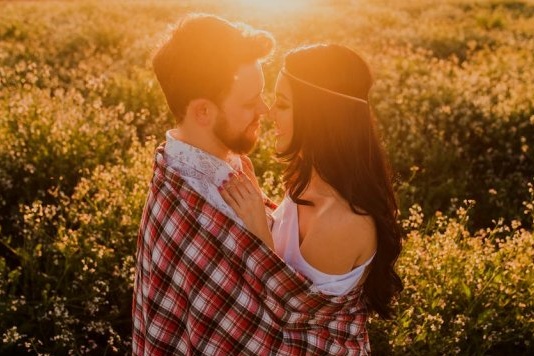 The dishes of passion are aphrodisiacs

On the eve of February 14, Valentine's Day, we want to give you some ideas for a romantic dinner filled with love, passion, and aphrodisiacs. But first, let's figure out what it is - aphrodisiacs

There is an ancient Greek legend that says that the goddess of love and beauty of Aphrodite lived on Olympus. Going down to the ground, she was amused, forcing people to fall in love at first sight, to experience the passion and miss each other. And each time, introducing men and women among themselves, she gave them a small gift - an apple, asparagus, honey or a few oysters. These products, after many years, were named after the goddess - the naughty "aphrodisiacs". 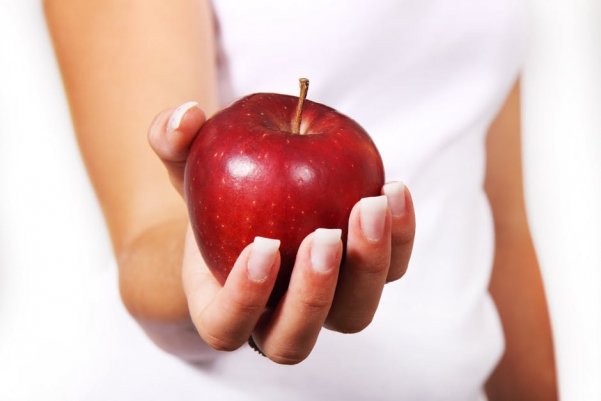 It is believed that the microelements and vitamins that make up these products change the hormonal balance of the body and affect the sexual activity of a person. Today, more than 100 products are known that can be considered as aphrodisiacs, although the most popular, popular and real aphrodisiacs in the world are just over a dozen.

We have picked up for you some tips for making dishes that are flavored with love, add passion and desire to your relationship. 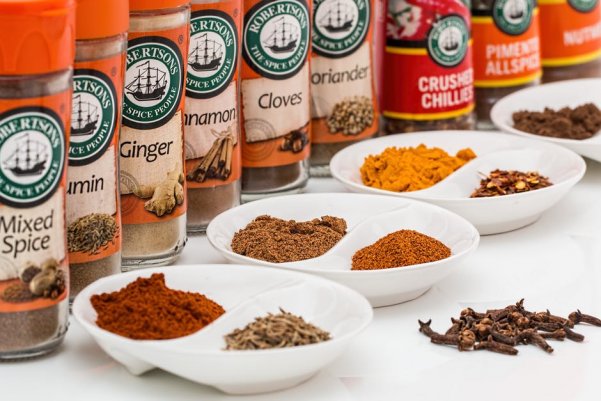 First of all, spices are included in the Afrotherians: basil, cardamom, ginger, marjoram, coriander, nutmeg, dill, fennel, caraway, red and black pepper, anise, cinnamon, lovage. Like many other aromatic seasonings and spices, they have long been used to prepare dishes of aphrodisiacs and drinks that arouse a love appetite. 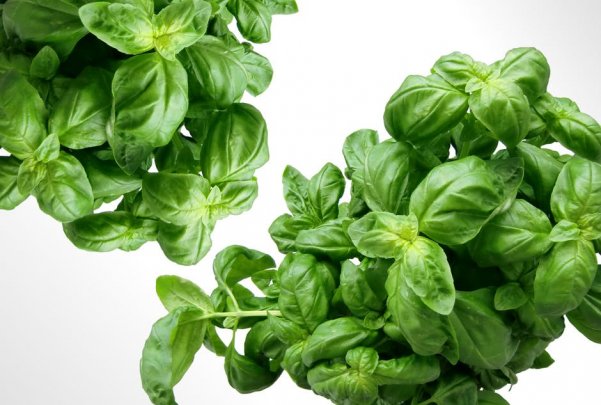 Basil is especially valuable. Pasta with basil to a romantic dinner on Valentine's Day is a pledge of one hundred percent passionate night. Do you know why Italian men are considered the most ardent lovers? It is because the pasta with basil is a daily dish for them! So do not spare the spices while preparing the dinner. If you are afraid to overdo it, you can simply order dishes of Italian, Indian or Thai cuisine in the nearest restaurant. 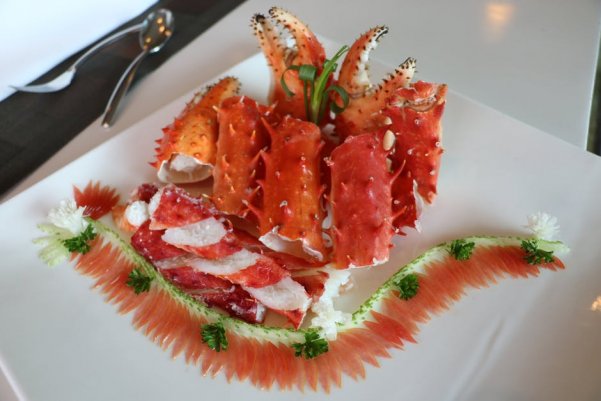 On the second place is seafood: oysters, shrimps, caviar, mussels, lobsters, lobsters, etc. It is not by chance that the goddess of love Venus, who had a passion for Vulcan, regaled him with these delicacies. And such a famous lover, as Casanova, considered caviar the best delicacy, which can be served directly in bed. 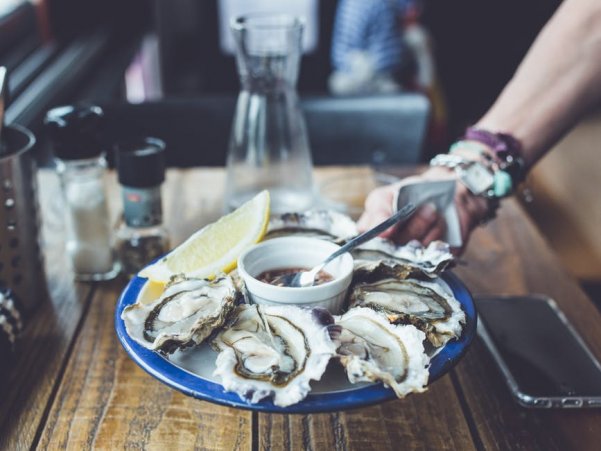 Of course, oysters are the most famous of aphrodisiacs. They are used for food to increase sexual desire. Such "fame" oysters gained because of the high content of zinc, which helps to accelerate the production of sperm and increase libido. Raw oysters with lemon juice and a glass of champagne are the perfect combination for an unforgettable romantic dinner! 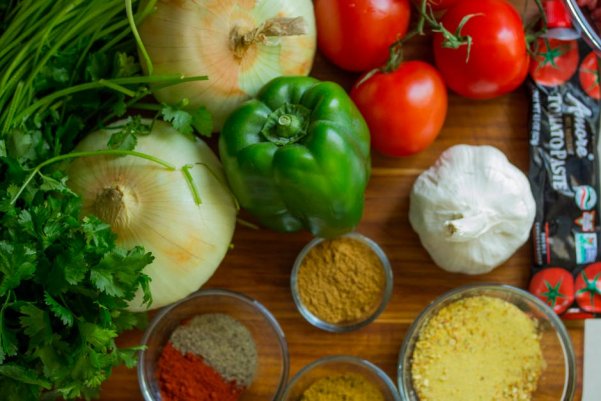 Of vegetables, spinach, onions, garlic, artichokes, tomatoes have a special effect, which has also been known for a long time. So, in the appeared in India about 5 thousand years ago, Ayurveda onion was considered a stimulant, causing instant excitement. It was no accident later that he was strictly forbidden to use it in monasteries. 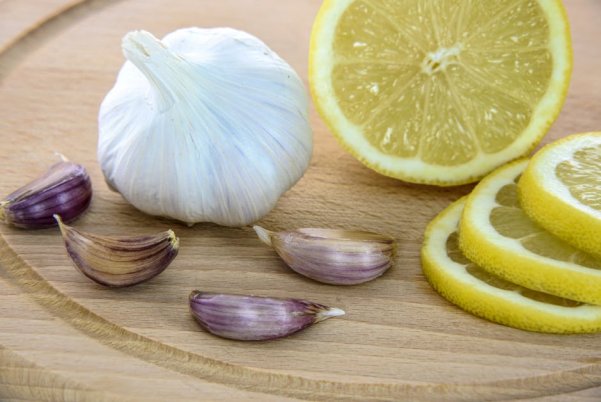 Garlic, with its bright (and not very pleasant aroma), is considered one of the most powerful aphrodisiacs! It promotes the expansion of blood vessels and accelerates the flow of blood in the body.And, which is typical, the "work" of garlic over the body is felt for several hours after dinner! And to neutralize the unpleasant smell after a dish of raw garlic, eat a slice of lemon or a leaf of mint. 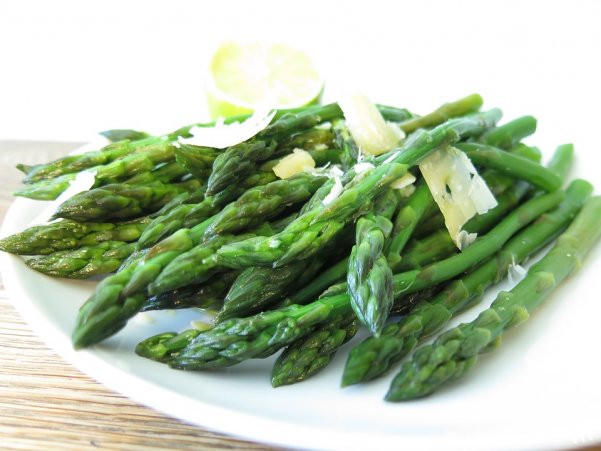 Incredible properties of spinach were discovered by English healers in the middle of the 17th century. Describing it, they said that asparagus "kindles a physical passion between a man and a woman." And in the 19th century in France, there was a tradition that the grooms at the wedding were served three different dishes from asparagus at different times. Modern scientists say that there was a good reason for this because asparagus is an excellent source of potassium, fiber, vitamins B6, A and C, as well as thiamine and folic acid. The latter, as it turned out, contributes to an increase in the production of histamines, which contributes to the achievement of orgasm in both sexes. 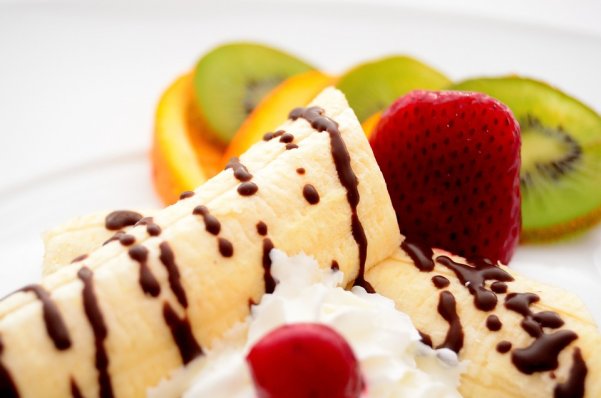 Of course, a romantic dinner involves dessert. You can serve fruits since ancient times are considered aphrodisiacs: bananas, figs, avocado strawberries. On the "effective action" of fruit and say nothing - neither Adam nor Eve could not resist the temptation to try the apple, which was due to his appearance the whole human race. 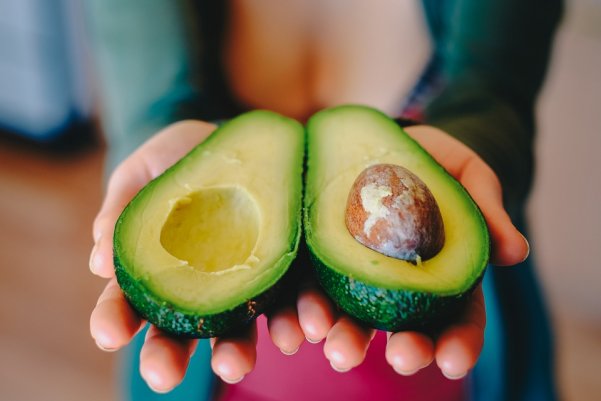 The strongest is considered to be avocado. The ancient Aztecs called avocado "tree-testicle", or aguacate. His tender pulp, rich in protein and vitamin A, was used to treat sexual impotence in Mexico, and later in Europe. In fact, avocados are one of the few aphrodisiacs, both externally and internally related to sexuality. The fruit is rich in folic acid, potassium, and vit. B6 . And as for its kind, there were even times when the Catholic Church, in general, forbade the cultivation and use of this fruit for food - in order to preserve chastity. Apparently, the priests were very embarrassed by the external naked sexuality of the fetus. Although, the loving king of France Louis XIV constantly included him on his menu. 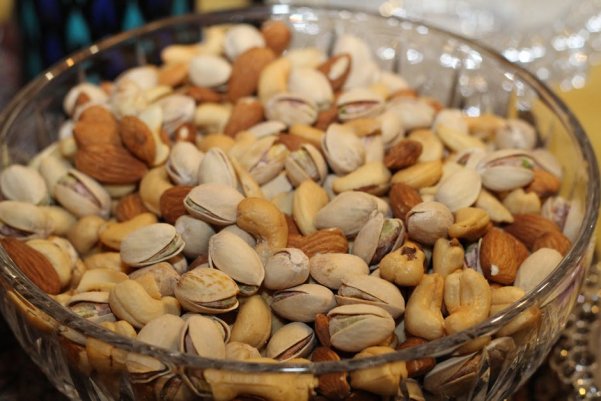 Nuts (mostly almonds, cedar, forest, walnuts, and peanuts) are suitable for the excitement of love appetite. In the East and the Mediterranean, nuts containing a large amount of protein and increasing the level of hormones have long been used as an aphrodisiac for the aphrodisiac. That is why the Turkish "Baklava" consisting of nuts and honey is called "Turkish Viagra". 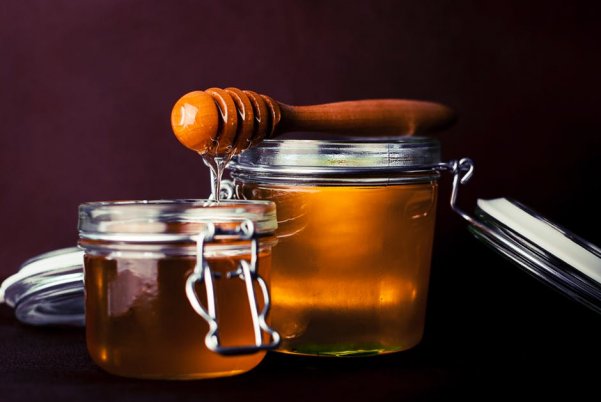 Honey, in itself, is the strongest aphrodisiac, a rich source of boron, a trace element that promotes the production of estrogen in the body - the female sex hormone. This mineral, as studies have shown, increases the level of testosterone in the blood. Testosterone is the hormone responsible for sexual attraction and orgasm, both in men and in women. It's not for nothing that the first month of family life is called honey: this expression came to us from Persia, where newlyweds every day for a month had to drink honey, restoring sexual energy. 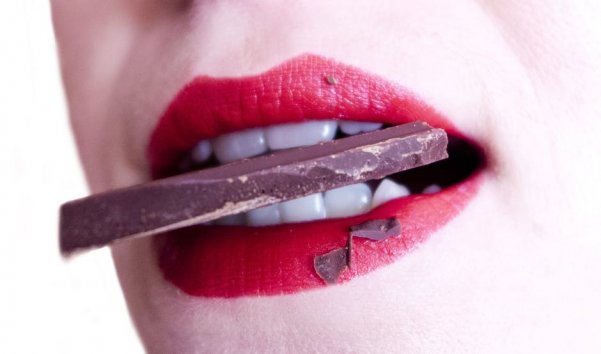 And, of course, where without chocolate? Pure chocolate, without additives and flavors - the king of natural aphrodisiacs. It contains many complex compounds - anandamide, phenylethylamine, etc., which stimulate the release of hormones of dopamine and serotonin into the fun centers of the brain. It is thanks to chocolate that a person feels happy, relaxed and in love with the whole world!

Well, in the end, a few recipes for drinks that will not leave your half indifferent. 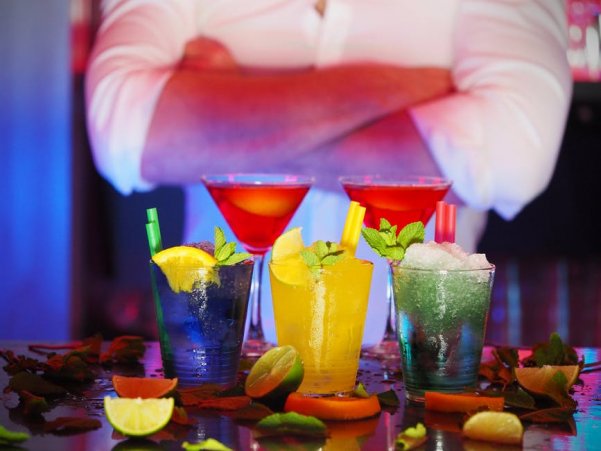 Absinthe. Do not stop to talk about how this drink warms sensuality and emancipation. Absinthe acts excitably thanks to tuyon, aromas of anise and spices.

25 ml of absinthe, 50 ml of champagne. On a spoon put a piece of sugar, pour it with absinthe and set it on fire. In Margarita Glass with a sugar fringe, pour the resulting caramel from the absinthe with the melted sugar, mix with the remaining absinthe and add the champagne. To cool.

Egg. Contains vitamins A and B1, it has a beneficial effect on male potency.

In a shaker, dissolve sugar in lemon juice, add gin, egg white, shake well. Add ice to the shaker and shake again. Strain the cocktail-aphrodisiac into the cooled Collins Glass, top up with soda water. 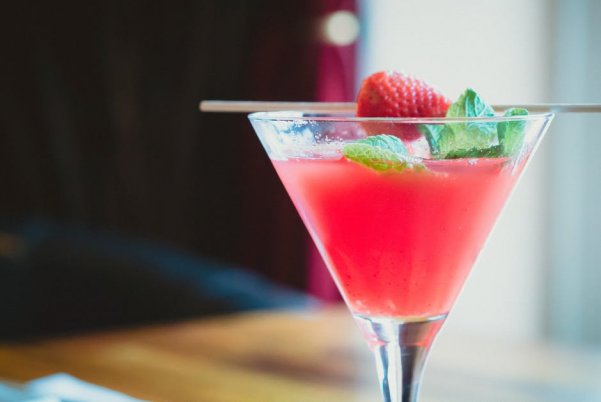 Cocktail of champagne and strawberry puree

Strawberries and champagne. A faithful tandem for seducing the most impregnable young lady. Increases the level of estrogen - female sex hormones.

In a blender, cook the strawberry puree. Add in puree lemon juice, sugar, mix everything well. Pour the cocktail-aphrodisiac into the flute. Fill it with chilled champagne or sparkling wine. Decorate flute berries strawberries.

Honey is the best restorer of sexual energy. Do not forget that honey is one of the most powerful allergens, therefore, before offering a cocktail of honey to a person, specify how he carries this sweet treat.

In a shaker half-filled with ice, place rum, honey, and lemon juice. Shake well, drain the cocktail-aphrodisiac in Cocktail Glass. 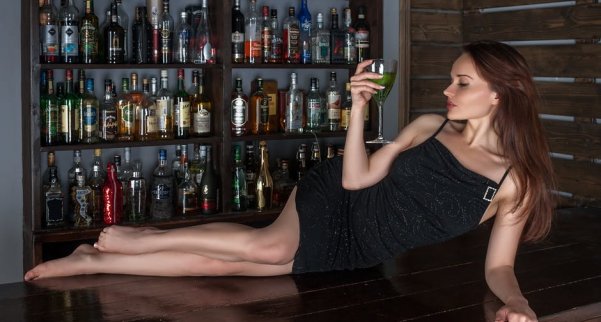 In a shaker, knead (without addiction) a small piece of ginger. Mix all the ingredients in a shaker with ice, shake, strain in Martini Glass. It is important that pieces of ginger do not fall into the serving bowl. Garnish a cocktail-aphrodisiac with raspberries. 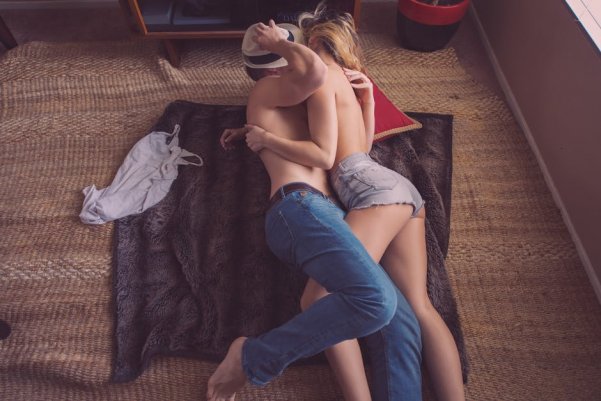 And remember that you do not cook, without the main seasoning - love, there will be a completely different effect! We wish you a wonderful romantic dinner and enjoy each other! 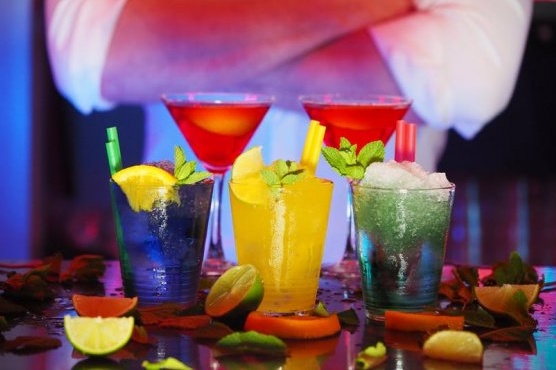 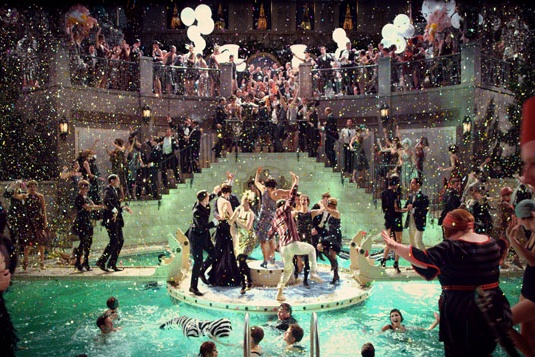 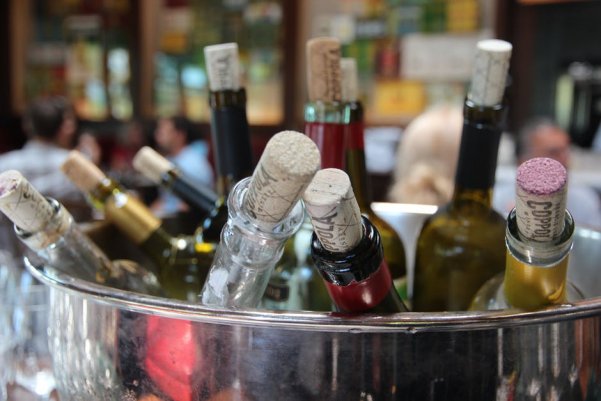 How to choose the right wine for a meal 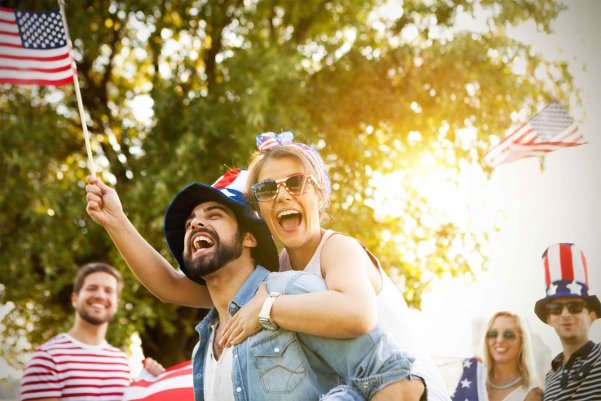